John E. Drabinski on posiitoning Heidegger in the academy.


It’s astonishing to me to read the sense of beleaguerment among scholars of Heidegger (or related thinkers) when confronted with his anti-Semitism. Just as Europe lived from the violence of slavery and colonialism, Christian Europe lived from anti-Semitism. It helped define nations, boundaries (what is Europe? not a continent, even as it’s called “the continent,” but there is of course the religious boundary), and entire modes of cultural and political life. It’s a part of Europe, not as a marginal feature, but, like slavery and colonialism, part of the infrastructure of its own self-realization and meaning. To say Europe is entangled with racism is uncontroversial. To engage Europe without thinking hard and systematically about entanglement? That requires some serious justification.

Physic majors should do a semester on Heisenberg's entanglement. Aeronautical engineers on von Braun's. Opera students. Heck, all music students. Logicians and analytical philosophers, to the front of the queue.

I love the irony of this meme. 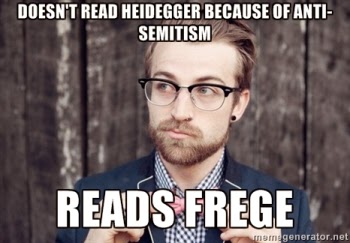