In our time people have learned to subordinate friendship to what's called "convictions." And even with a prideful tone of moral correctness. It does take great maturity to understand that the opinion we are arguing for is merely the hypothesis we favor, necessarily imperfect, probably transitory, which only very limited minds can declare to be a certainty or a truth. Unlike the puerile loyalty to a conviction, loyalty to a friend is a virtue—perhaps the only virtue, the last remaining one.

I look at a photograph of the poet René Char alongside Heidegger. The one celebrated as a French résistant to the German occupation, the other denigrated for sympathizing with early Nazism at one point in his life. The photo dates from the postwar years. The two are pictured from the rear;
with caps on their heads, one figure tall, the other short, they are taking a walk in the outdoors. I am very fond of that photo. 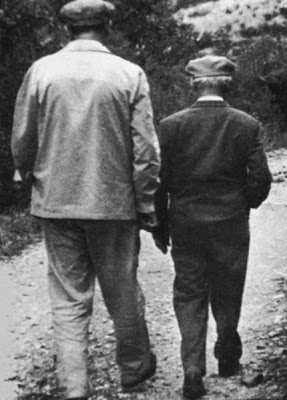