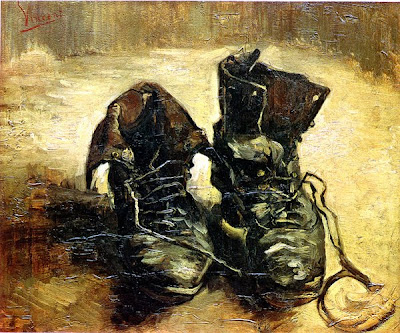 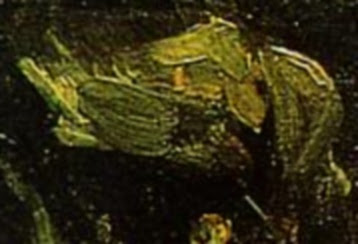 A painting by Van Gogh: a pair of tough farmer's shoes, nothing else. The picture really represents nothing. Yet, what is there, with that you are immediately alone, as if on a late autumn evening, when the last potato fires have burned out, you yourself were heading wearily home from the field with your hoe. (IM 37–8/GA40 38)

[...] Van Gogh seems to devote as much care and attention to his use of color and brush strokes as he does to representing the fairly simple subject at the center of the painting. What is so interesting about this for us, however, is that if one attends carefully to what emerges from “[o]ut of the dark opening of the well—worn insides of shoes” (PLT 33/GA5 19) — attending specifically to the lighter patches of color that emerge from the dark opening of the shoe on the right — one can indeed discern the head (hair bonnet and face in profile), torso, and arms of what could easily be a woman, carrying a hoe (a small shovel), with what could even he a yellow—orange “fire” smoldering behind her. I have tried to isolate this figure in the following detail.

Insofar as we too can discern “the little old woman who lived in the shoe” (as I like to call this figure which I am convinced Heidegger himself saw), then I think we can be certain (pace Derrida) that Schapiro did in fact correctly identify the precise painting Heidegger was discussing: A Pair of Shoes (1886). But this also means that Heidegger is not using Van Gogh’s painting as a jumping off point for his own free—associations. Instead, Heidegger is drawing directly on his own phenomenological encounter with the painting when he describes “what is there” (IM 37—8/GA40 38) in the work’s inconspicuous earth/world struggle. This, moreover, would also explain what Heidegger means when (immediately following the quotation Schapiro throws back at him) he writes:


If anything is questionable here, it is rather that we experienced too little in the vicinity of the work and that we expressed the experience too crudely and too literally. (PLT 36, emphasis added/GA5 21)

If Heidegger was literally describing the figure he saw emerging from “[o]ut of the dark opening of the well-worn insides of shoes” (PLT 33/GA5 19) in Van Gogh’s A pair of Shoes (1886), as I think it now clear that he was, then what Heidegger offers us is not merely the projection of his own subjective associations onto a blank canvas but, instead, a meaningful gestalting of something from what is really there, something we too can phenomenologically confirm for ourselves.