[Heidegger, in The Ister lectures (1942),] undertakes a second reading of the choral ode, in which he develops the complex ambiguities of the “fundamental word,” to demon, while seeking, at the same time, “the original and essential unity” of its opposed significations (which are taken to attest to the contrariety of truth and essential untruth). The oppositional structure in terms of which Heidegger understands to demon may be diagrammed as follows: 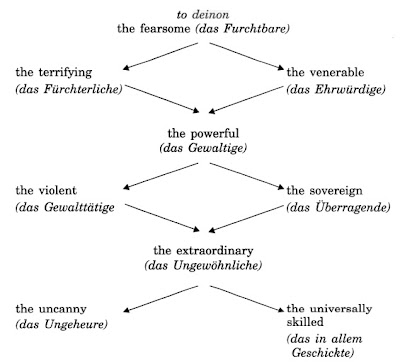 Apart from rendering to deinon as “the fearsome,” Heidegger translates it, in a more fundamental sense, as “the unhomelike” (das Unheimische). He defends this translation as “more truthful” than a literally correct translation (including Hölderlin’s “the uncanny”), in that it indicates, for him, what underlies the term’s opposed significations as their hidden unity. “The unhomelike” is here a name for being’s enigma.

Among the opposed significations of to demon (for which Heidegger gives no Greek terms), “the universally skilled” needs some elucidation. Heidegger comments that the skillful mastery at issue is extraordinary (deinon) in that it admits nothing which exceeds its own capacities, so that it insists inflexibly on reducing all things to a common denominator, putting them into a position of mastery. To deinon as “the universally skilled” is evidently a figure of technicity and of its reductive posit or reductive totalization.

Although Heidegger’s second reading of the Antigone remains focused on the first stasimon, he now embeds the latter in the tragedy as a whole, with particular concern for the figure of Antigone and the essential character of the polis. The tragic conflict is no longer played out between technë and dikë, but rather between two modalities of homelessness and homecoming; and, in keeping with this shift, the entire rhetoric has changed from a rhetoric of power to a rhetoric of alienation. Homelessness or homecoming characterize the human being which is now the locus of contrariety.

me wortbuch has it as monstruous, enormous, huge (whether n or adj). "uncanny" sounds like...a freudian-PC gal sort of reading--tho, Oedipus discovering the truth...about Jocasta, et al--a bit monstrous (not to say
Jim Morrison like). Antigone's like the aftermath, follow-up LP, right